Board games have undergone rapid development over the last 20 years or so. The sector has sprawled and new kinds of board games emerged. Currently, we’re living through the board game golden age.

All these developments and innovations have made it hard for the average consumer to keep up with all the latest board game trends. Anyone who start to do some research on board games is inevitably baffled by some of the terms that didn’t exist just a few years ago, such as euro game, Legacy game,social deduction game and worker placement game.

This article is part of a wider series on modern board games. You may also enjoy our articles on why board games are increasingly popular, 7 reasons to play more board games right now, and the most popular board games in other cultures.

How Many Board Games Are There?

Of course it’s an incredibly difficult task to determine how many board games there are in the whole world, but we can arrive at a decent guesstimate.

The board game website BoardGameGeek lists over a 100.000 separate board game entries in its database. This includes expansions to games and some user created content, such as desired expansions. But, this still gives us an idea of the order of magnitude of board games out there.

And this magnitude is recent. Check out this graph, published in Medium, based on the database of BoardGameGeek: 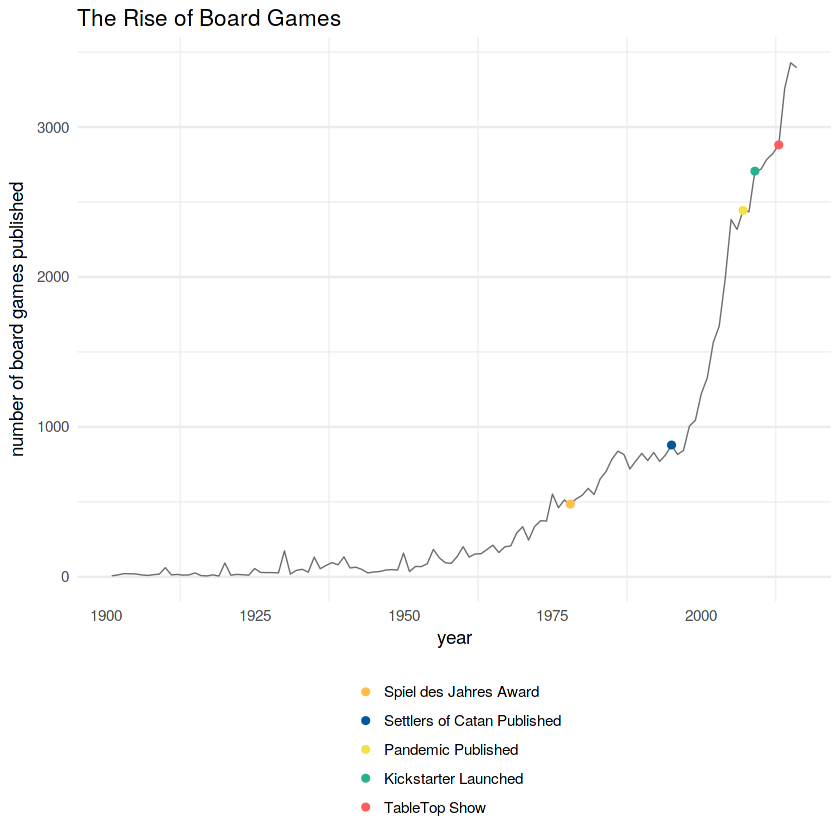 This graph shows the number of board games published each year, and it’s clear that his number went way up around the turn of the millennium. In a different article we explain this sudden surge in board game popularity. For our current article it’s enough that we realize that there are many board games, and new board games are published at an increasingly high rate.

One more important caveat on the BoardGameGeek data is that it only really covers western board games. Board games that are popular in other cultures aren’t really included in it. For example, there’s hundreds if not thousands of versions of Mancala played across Africa, the Middle East and Asia, but those aren’t (all) listed in this dataset.

Why Are There So Many Different Board Games Now?

We explain this more thoroughly in another article, but basically increased demand for board games lead to increased competition, which lead companies to produce more niche board games.

The classic board games such as Monopoly, Risk and Settlers of Catan used to be pretty similar: they take 1 to 2 hours, you play them with 3 to 6 (but ideally 4 to 5) players, their core mechanic is the dice throw, and they center around a board on the table. This is also where board games got their name: board games.

One of the first things you’ll notice about modern board games is that they often don’t have a board at all. For example, social deduction games center around each player’s hidden identity, which isn’t represented on a board. Party games often do have a central element, but it tends to be something more fluid than a board, like for example the cards in Codenames.

Further, game length has become more variable, and generally shorter. And the same can be said for player count. There’s now plenty of games that you can play with more than 7 players, with only 2 players or even by yourself.

In terms of mechanics board games have seen the most innovations. Long gone are the days in which dices determine the outcome of a board game. In fact, I can’t think of one game that came out in the last ten years that even uses dices at all.

The creativity of board game designers, prompted by an increase by demand of the public, is what lead to the huge variety of board games on offer today.

What Kind Of Board Games Are There?

You can divide up board games into categories in probably a million different ways. The most popular way however, is to do it based on their core mechanics. Some popular board game categories that arise from this method are: Euro games is kind of an antiquated term at this point, but people still throw it around.

European games were more about indirect conflict and promoting strategy rather than luck.

Nowadays, most board games that come out are what you used to call euro games. But the term is still used to refer to this indirect conflict and strategy kind of genre. Escape Room games enable you to make your own home into an escape room. These games typically involve solving a series of puzzles under time pressure, and may or may not involve physical components such as safes, locks and keys. Cooperative board games don’t pit players against each other but rather let them work together to beat the game as a team. Typically they have to beat the game within some implicit time frame or they lose.

We wrote a post about our favorite cooperative games that you can view. Area Control games require players to gain control of area on a central map. Often this area gives them resources that they can use to try to gain further control of more map areas.

Examples: Risk, Diplomacy, Game of Thrones the Board Game Abstract games are defined by their relative lack of theme. The board is just a board and the pieces are just pieces.

Often a little bit of theme slips in, such as the light warfare theme in Chess and the art theme in Azul, but not much. Go is probably one of the most pure abstract games.

Deck building games let players build a deck while they play the game. So this is different from collectible card games, in which players create a deck before the game and then play with that deck. Drafting games let players draft cards or other items, usually from a common pool. Drafting can be a minor or major element of board games. Games that rely heavily on drafting are TerraForming Mars and 7 Wonders, and Citadels.

Legacy board games are played out over multiple sessions and during each session the game is permanently altered. This is usually done by destroying components of the game and introducing new rules and mechanics.

Dungeon crawlers are named after the most popular dungeon crawler: dungeons and dragons. In these games players create a character and then role play their way through some epic adventure over multiple sessions.

This is different from Legacy board games however, because the game is continuous and doesn’t get altered during each session.

Roll and write games involve throwing dices and then writing something based on their outcome. Worker placement games involve allocating workers on the board to optimally gain resources or complete other objectives. These games are popular among board game players that enjoy micro managing and optimizing their strategy.

Engine building games are so called because they require players to build an ‘engine’, i.e. something that starts off slow and then keeps going faster and faster.

For example, the deck building game Dominion is also an engine game. Players start with a modest deck, and then add more treasure cards and action cards to it, so they can add even more treasure and action cards to it more quickly, and so forth and so forth, until they feel like their engine can win the game. Engine building games are often best played with 3 players.

Modern Board Games: Which To Choose?

We’ve seen that there are very many board games of very different kinds. So you may be left thinking: how do I even choose a board game nowadays?

Our advice is always to start with what you already like. If you’ve seen a game you like in one of the categories above, pick another game from that same category.

Or, pick an expansion to a game you already own and enjoy. There’s a good chance the expansion will put that game in a new perspective for you so that you can play it more often again. We also have a whole lot of expansion buyer guides on our website, so check out those.

If you want something completely new, then we recommend just picking up a recently published game. As with anything, board game publishers get better with practice, so the newer the game the better it generally is.

We hope that this guide helps you find your way through the forest of modern board games. If you have any questions left at this point, feel free to send in your question through our contact form.